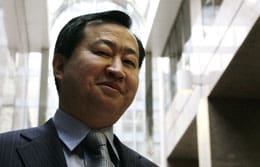 Born in India, immigrated to Canada in 1976 with $200 and a high school diploma.

Worked at Bell Canada for 7 years as a telephone repair man.

Joined Hamblin Watsa Investment Counsel / Fairfax Financial after 18 months. He is a Vice-President at Fairfax Financial managing their investment portfolio with $0 salary to prevent conflict of interest while he manages the Chou Funds in his spare time.

Undervalued – Companies facing short-term problems that result in temporary mispricings under unusual circumstances.
Cigar butts – CRAP (Cannot Realize A Profit) failing companies that are irrationally valued for less than they would be worth if they liquidated their assets. Buy baskets of such companies, knowing that he may lose money on 3 out of 10, but more than make up for those losses with profits on the other 7.
Buffett-style – Well-run companies with growth potential that, for some reason, are trading for much less than they’re worth. Such companies are extremely rare and often only found among those with short-term problems, but they offer excellent long-term prospects. Lucky to find 1-2 in a year. Will bet 5% or more of his portfolio on that single stock.

What He Looks for in a Company

Francis Chou, the fund manager of Chou America Mutual Funds, has been managing the Chou Funds in Canada since 1986.

In 1981, Chou started an investment club along with six of his Bell Canada co-workers. The club started with $51,000 which Mr. Chou turned into $1.5 million over the next five years. In 1984, Francis Chou left Bell Canada and became a retail analyst with GW Assets, where he met another notable investor Prem Watsa, who was also an immigrant from India.  After 18 months with GW Assets Mr. Chou left and joined Prem Watsa at Fairfax Financial Holdings Limited, as one of its original investors. Mr. Watsa is currently the CEO of Fairfax Financial, which manages $31.7 billion in assets. In 1986, Mr. Chou turned the investment club into Chou Associates Fund.

Francis Chou’s investment Philosophy can best be summed up in two words “Buy Bargains”. Of course, buying bargains is no simple matter. Chou can best be categorized as a value investor. Some people have called him a bottom fisher. Mr. Chou will typically look for stocks that display the following characteristics:

1) Above-average to excellent companies as measured by high ROE in excess of 15% sustained over 10 years or more.

3) Prudent deployment of capital as measured by a company’s capital expenditures, judicious acquisitions, and timely buybacks of its depressed shares.

4) A stock price which is far lower than what a knowledgeable rational buyer would pay.

Mr. Chou is a highly disciplined investor and would much rather hold onto cash than overpay for a stock. He looks to purchase stocks in companies that fit into one of these three characteristics.

Companies whose shares are “CRAP”. These are companies that cannot realize a profit. Mr. Chou believes that investors will run from companies that have losses thus leaving the stock undervalued.

Companies that are well run and have the potential for strong earnings growth but for some reason are trading for less than they are worth. This approach is similar to Warren Buffett’s, and is the investing tactic that he most often uses. When using this tactic  Chou rolls up his sleeves and does long hours of company research. He will need to know the following about the company:

Does it have a strong balance sheet?

What is the company’s cash flow position?

How well does the company rank when compared to its peers?

Is the company is run well and does it have good management?

Why the stock is trading below intrinsic value, and are the problems short term?

Below are some thoughts from Francis Chou that give an insight into his thoughts on investing.

1. Chou thinks most investors make the mistake of buying a stock because its price is going up instead of buying stocks when they are on sale – the way people like you buy their groceries or other merchandise.

2. Chou wants his investments to be made with a margin o safety. He wants to buy a stock when it is selling for a discount of 40% to 50% from his estimate of the company’s value.

3. Chou has no problem with making a large bet when he has conviction and a large margin of safety. At one point, he had 16% of his fund in Sears Holdings. Chou estimated that the company’s real estate holdings were worth $40 to $50 per share, and Chou was able to buy it at $25 per share.

4. “Chou does not attribute his investing success to having a high IQ.” “George Athanassakos, professor of finance and the Ben Graham Chair in Value Investing at the Richard Ivey School of Business, thinks that Chou might be right: perhaps he’s not outperforming because of superior intelligence, better connections or charisma. Maybe it’s because Chou’s natural disposition just happens to be a perfect match to the investing style he’s chosen.”

“Find bargains and maintain discipline; if you can’t find bargains stay in cash.” “Stocks are very expensive. You have to be very careful these days,” “But I’m waiting for the market to break, so we can put our cash to work.”

“Be aware of the risks involved, including that of the manager who does not have a long history of investing heavily in that area. Caveat emptor!”

“the first step to getting out of a hole is to stop digging.”

Francis Chou (who was selected as the Canadian Fund Manager of the Decade by the Canadian Investment Awards program) runs the Chou Associates Management Firm which manages assets totaling over $1 billion. The firm was first founded in 1986. Over the last 10 years, the flaghip found has produced a cumulative return of 119.9% over the S&P500. Mr. Chou works alone and refuses to follow the trends set by other investors. If he thinks that the market is too expensive, he is willing to hold a large percentage of cash assets. He has been known to hold over 40% of the firm’s assets in cash. Mr. Chou does not invest in commodities. He also avoids high tech stocks which he calls “high wrecks” and real estate.

For Series A units:

What makes this even more impressive, is that not only does Francis Chou manage $1 billion and fantastic returns across every single asset class, but he also has zero analysts! Chou does all the work himself.

Mistakes to Learn From

There has never been an investment manager that has not made some bad investments. Unfortunately, all investors learn through trial and error. Often times, we learn more from our mistakes than from our successes. Here are a couple of Mr. Chou’s investments that did not turn out well.

McClatchy Company (MNI) MNI is the largest newspaper company in US based on circulation. The company suffered large losses in 2006, 2007 and 2008. Chou Associates owned 5,571,077 shares, which were sold as follows:

KSwiss (KSWS) KSwiss sells athletic apparel and footwear. This company had earnings decline for 5 straight years and suffered losses in 2009 and 2010. Chou Associates owned 472,046 shares, which were sold as follows.

Mr. Chou purchased these companies when they were down and out with the belief that they could turn thing around. Even though Mr. Chou remained true to his investment strategy these stock selections did not work out.

Francis Chou has recently been investing heavily in the banking industry and has picked up shares of Goldman Sachs (GS), Wells Fargo (WFC.WS), JP Morgan & Company and Bank of America Warrants. It will be interesting to see how these investments perform.

In recent years Mr. Chou’s investments have not performed very well but the stock market in general has not performed well either. He always invests for the long term and his current investments may well turn out to be big winners. Mr. Chou remains committed to buying battered or out-of-favor stocks. He believes that “If you stick to the principle of value investing, things will work out well for you”. Over time, Mr. Chou has proven himself to be one of the great investors.