Did you read the gold report? If not, click the below link.
22 Feb 2022: MCX Gold’s Bullish Mode Activated

I have updated a full report of Nickel on Feb 6, 2022. Did you read it? If not, click the below link:
2020’s Uptrend Channel Is Everything For MCX Nickel

I had written, “It’s a 100% sign for a buy signal. But intraday or short-term investors should confirm that breakout before proceeding. And they must look out for candle’s fakeout. Afterward, be ready for the targets of 1800 – 1840 – 1876+“.

What else do you need from a free subscription!?

MCX Nickel is following the above uptrend channel from 23 Jan 2020. And making a good trade opportunity for commodity traders. Nickel’s upward trend is not over yet. But we may see a downfall below the control price, and it can be up to 1686 – 1620.

But what happens if it breaks the control price?

It’s a 100% sign for a buy signal. But intraday or short-term investors should confirm that breakout before proceeding. And they must look out for candle’s fakeout. Afterward, be ready for the targets of 1800 – 1840 – 1876+. Currently, silver has jumped back into the uptrend area. It has also broken the parallel channel in the last trading session. But, the buy is not confirmed yet. The uptrend can be resume if it remains above 0.618 of retracement level and 3/1 & 8/1. First, did you read my last gold outlook report? If not, click here and read it now.

At present, gold is under buying pressure. We will see the remaining targets soon. 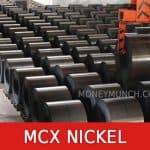 How many of you read the 27 Sep technical report of Nickel? If you did not read then click the below link:
MCX nickel’s Elliott wave projection (Target 1570)

Did you read my Aluminium report? If not, then click the below link:
Aluminium Should Run Up To 240+ In Next 30 Days

Aluminium has tested 226.8 on 30 Sep by making a low of 226.1. Afterward, it started moving forward and touched all targets.

If you’re still losing money in MCX trades, nobody can help you. Nickel has started moving forward since March 2021. It will complete the 5th wave soon.

According to Elliott wave projection, MCX nickel can touch 1570 to end the 5th wave.

Crude oil has completed all targets in the previous week’s trading sessions. 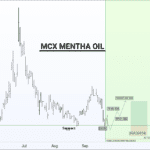 This is MCX Nickel weekly chart. Price projection is based on Parabolic Curve & Fib Retracement.

Remember, trade with the direction of the breakout. And stop-loss above/below breakout level. Whenever it hits the hurdle level, what will happen? Here, it will act as resistance. We may see reversal up to the support line (1212 – 1180).

Short-term investors can continue position for the above targets. Further information I will update during the market hours for the premium subscribers only.

This is part II. You can also refer to the previous report of nickel by clicking here.