The love for gold has been reignited in India, according to the World Gold Council (WGC) in its Gold Demand Trends for the third quarter of 2012. India regained its title as the strongest performing market, overtaking the greater China area, as the country experienced a bounce-back in demand due to improved sentiment during the festival season.

Together these markets in the east made up 55 percent of the world’s jewelry and investment demand, according to the WGC.

Although India experienced a setback earlier this year when gold shops boycotted a proposed tax on the yellow metal, imports recovered by July “as inventory levels were bolstered (aided by a well-timed dip in the local price) and the market adjusted to the customs duty,” says the WGC.

The third quarter has historically been a strong seasonal time for the Love Trade to come alive in the east. Monsoon rains and the festival season in the fall are generally associated with the buying and giving of gold. Still, for the year, don’t expect the Love Trade in India to be as strong as it was in 2011, as gold demand remains subdued with the ongoing weakness of the rupee.

The Federal Housing Administration reported that it has exhausted its reserves, possibly requiring a bailout from U.S. taxpayers for the first time ever in its nearly 80-year history. 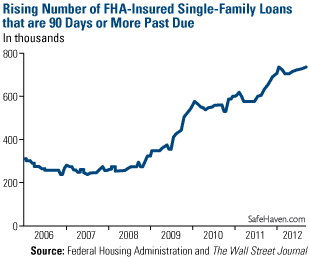 The agency prides itself on being “the only government agency that operates entirely from its self-generated income and costs the taxpayers nothing.” Meanwhile, delinquent loans have been steadily climbing for the last few years. According to data from the FHA, the Wall Street Journal reported that the number of single-family loans insured by the FHA that are 90 days or more past due climbed to roughly 739,000 in September. “That represents about 9.6 percent of its $1.08 trillion in mortgages guaranteed,” says the WSJ.

Now its capital reserves have dropped to a negative $16.3 billion. This is considerably below the required 2 percent capital cushion. Based on its $1.1 trillion portfolio, it should be reserving about $22 billion.

To keep the FHA solvent and meet its requirement, approximately $38 billion of cash would need to be injected.

The FHA has played an important role in keeping the housing market healthy, as it provides insurance on mortgage loans for single- and multi-family homes. Many of the loans backed by the FHA are held by borrowers who make a small down payment, which can be as little as 3.5 percent of the purchase price. Without the government’s guarantee, most private lenders wouldn’t have originated these loans.

It appears that another government bailout is on the horizon. The housing market is key to the U.S. recovery, which incentivizes the government to print more money and debase the currency, just as the Federal Reserve is driven to seek maximum employment. These continuing actions should stoke gold’s Fear Trade all through the winter.

Gold is a “must have” investment today, according to Investment Strategist Keith Fitz-Gerald of Money Map Press. During our latest webcast, Keith explained how gold helps hedge value. The yellow metal has been “proven to have a roughly 10-to-1 relationship with interest rates. And that means it’s an indirect correlation or a corollary to bond portfolios,” he says.

“If interest rates start rising, that’s where your gold is really going to pay off,” Keith says.

Read more about the dynamics driving prices higher in our Special Gold Report.

Keep in mind that although there are many powerful reasons to accumulate gold, make sure you invest prudently. We recommend having a 5 to 10 percent weighting of gold and gold stocksin your portfolio. How should you invest the other portion?

Keith suggests structuring portfolios using the 50-40-10 pyramid model shown here. At the bottom of the pyramid are the “Base Builders,” where 50 percent of the portfolio is invested in defensive positions that tend to hold their value in nearly all market conditions. One base builder that Keith recommends is U.S. Global’s Near-Term Tax Free Fund(NEARX), which invests in municipal bonds that have a relatively short maturity.

Above the Base Builders are the “Glocal Income & Growth” investments, which should make up 40 percent of a portfolio. These are globally recognized brands with strong balance sheets, experienced management, high levels of cash flow and above-average dividends.

The remaining 10 percent is invested in what Keith calls “Rocket Riders,” which are riskier assets. Special situations, IPOs and options fall into this category, allowing the investor to “swing for the fences.”

The global economic picture came into focus a little more with the announcement of China’s new leadership. We now know the seven men who will lead the world’s most populous country and second largest economy over the next several years.

But don’t expect sweeping changes, as the new pyramid of power will likely follow the path of its predecessors. Yet the leaders will likely feel pressure to “continue making significant reforms to China’s economic structure and expanding the personal freedom of its people,” says China Macro Strategist Andy Rothman of CLSA. Likely pushed to the top of the agenda is the rule of law, as it is a key evolutionary step for China and can benefit both the rich and the poor. CLSA believes it is fundamental to the country’s economic growth as well as its social stability.

We will need to wait until after the Party’s economic work committee meeting in December to hear about China’s economic strategy for 2013, however, more details will be revealed after the new government formally takes office in March. Regardless, it would be helpful to eager investors to communicate stronger reform messages sooner rather than later.

“We’re In for a Barbeque Economy”

Despite the clarity that we have following the outcome of the U.S. elections and the selection of China’s new leaders, we’ll likely continue facing uncertainty during this long, slow recovery, says Keith. It helps to think of the economic recovery like a good barbeque. It doesn’t come from being cooked fast; rather, it requires patience and time. So even if progress is slow in this “barbeque economy,” growth will continue, he says.

Make sure your portfolio is well prepared.