Home » Why Cyprus Is a Special Case 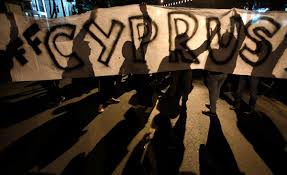 The Cyprus bailout deal is a big improvement over the first botched attempt. It doesn’t repeat the error of breaching the guarantee on bank deposits up to 100,000 euros. Instead, it restructures the two biggest banks and forces their creditors, including large depositors, to take huge losses.

Yet the euro area’s leaders must do a lot more to convince Europeans and the markets that they have drawn the right lessons from this debacle. They need to say clearly why Cyprus is an exception and commit to integrating the euro area further so that it’s less vulnerable to such crises. They’re failing on both points.

March 26  – Philippe D’Arvisenet, chief global economist at BNP Paribas SA, talks about Europe’s sovereign debt crisis and the outlook for the euro. Cyprus dodged a disorderly sovereign default and unprecedented exit from the euro by bowing to demands from creditors to shrink its banking system in exchange for 10 billion euros ($13 billion) of aid. D’Arvisenet speaks in Singapore with Haslinda Amin on Bloomberg Television’s “On the Move.”

The head of the euro area group of finance ministers, Jeroen Dijsselbloem, appeared to draw all the wrong conclusions in a March 25 interview, after the new deal was struck. He suggested that the Cyprus pact offered a new template for resolving the debt crisis.

Under this new model, the burden of repairing banks would shift from taxpayers to private creditors. Specifically, Dijsselbloem said he hoped the new approach meant that the 500- billion-euro European Stability Mechanism would never be used to directly recapitalize banks.

Previous ArticleBankNifty Future – Major Hurdle at 11260Next ArticleThought for the Day: Peace, Love and Wisdom