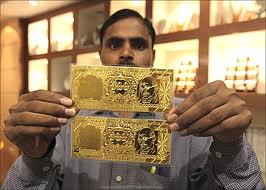 Jewellery traders in the Tex city are facing a serious slump in their gold business owing to the rising price of the yellow metal on one side and the fall in rupee value on the other side. Worried over the declining sale, traders have demanded that excise duty on the precious metal be reduced, so as to ease imports from other countries, which might help stabilize the rates.

President of the Coimbatore Jewelers Association K Krishnamoorthy said the two major reasons for rise in gold price are the value falling of rupee against the US dollar and the lack of gold metal in the market. “The import of gold was not stopped officially. The excise duty on it was hiked four times in a year. The excise duty in 2012-13 was 4 per cent. It is 10 per cent now. This has let to an increase of 16 per cent in gold price,” said Krishnamoorthy.

“The Central government should reduce the excise duty on gold to the earlier levels of 4 per cent. Only then will the jewellery trade revive,” he added.

“The season from mid-August to Deepavali is the peak period for gold trade. But, the rupee crisis and hike in excise duty has hit the industry at a wrong time,” he complained.